4 Things you need to Know About DNA 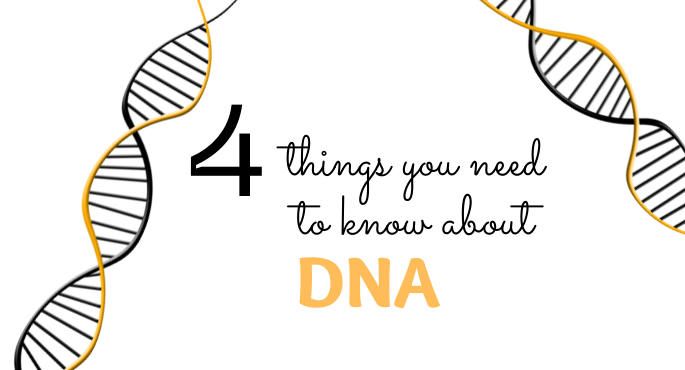 DNA is a blueprint of a human body and it is present in the human cells which carry the genetic instructions used for growth, functioning and reproduction of living organisms.

What is the importance of DNA?

The code within our DNA provides directions on how to make proteins that are vital for our growth, development, and overall health. The DNA code is prone to damage and it is estimated that tens of thousands of get damaged every day. The damage can occur due to errors in DNA replication, free radicals, and exposure to UV radiation.

The cells have specialized proteins that are able to detect and repair the damaged DNA. But if the protein in the DNA does not work properly it could lead to various diseases. There are five major ways for DNA repair.

Some examples of diseases that occur due to mutations in a single gene include cystic fibrosis and sickle cell anemia. Mutations can also lead to the development of cancer. For example, if genes coding for proteins involved in cellular growth are mutated, cells may grow and divide out of control. Some cancer-causing mutations can be inherited while others can be acquired through exposure to carcinogens like UV radiation, chemicals, or cigarette smoke.

What is DNA made of?

The DNA molecule is made up of nucleotides. Each nucleotide contains three different components — a sugar, a phosphate group, and a nitrogen base.

The sugar in DNA is called 2’-deoxyribose. These sugar molecules alternate with the phosphate groups, making up the “backbone” of the DNA strand.

Each sugar in a nucleotide has a nitrogen base attached to it. There are four different types of nitrogen bases found in DNA and they include:

What do you need to know about DNA?

The appropriate section of DNA is called a gene. Every cell in the human body is packed with many components that are vital for life and one of these components is the gene. All of us have about 35,000 genes that determine hair colour and texture, skin and eye colour, height and other features of our physical appearance. Our genes also play an important role to determine the quality of our internal organs. Not all diseases are caused by a single gene and by studying an individual’s gene structure, scientists hope to detect and treat illness even before the patient experiences any symptoms.

When genes are damaged, it can have an impact on our health. Some researchers believe that all diseases arise from genetic malfunction but that is not true, because some defective genes are inherited from our parents and others are damaged by exposure to harmful elements in our environment.

The study of the gene structure is known as genomics. Genomics may also reveal why a certain drug proves effective for some patients and not for others. Genomics also help us to understand why certain individuals are more prone to cancers than others or why a type of cancer is more aggressive in some people than in others. The specific genetic information will give the doctors the ability to prescribe the medicine and the dosage needed in your particular case.

Health Atmos is India’s first Health Management Organisation. In the post-COVID era, health will take the center stage of life. From preventive health checks to ensuring a healthy workplace, we deliver healthcare to your doorstep.

We use cookies on our website to give you the most relevant experience by remembering your preferences and repeat visits. By clicking “Accept All”, you consent to the use of ALL the cookies. However, you may visit "Cookie Settings" to provide a controlled consent. If you continue to use the website we would assume that you consent the use of cookies.
Cookie SettingsAccept All
Manage consent

This website uses cookies to improve your experience while you navigate through the website. Out of these, the cookies that are categorized as necessary are stored on your browser as they are essential for the working of basic functionalities of the website. We also use third-party cookies that help us analyze and understand how you use this website. These cookies will be stored in your browser only with your consent. You also have the option to opt-out of these cookies. But opting out of some of these cookies may affect your browsing experience.
Necessary Always Enabled
Necessary cookies are absolutely essential for the website to function properly. These cookies ensure basic functionalities and security features of the website, anonymously.
Functional
Functional cookies help to perform certain functionalities like sharing the content of the website on social media platforms, collect feedbacks, and other third-party features.
Performance
Performance cookies are used to understand and analyze the key performance indexes of the website which helps in delivering a better user experience for the visitors.
Analytics
Analytical cookies are used to understand how visitors interact with the website. These cookies help provide information on metrics the number of visitors, bounce rate, traffic source, etc.
Advertisement
Advertisement cookies are used to provide visitors with relevant ads and marketing campaigns. These cookies track visitors across websites and collect information to provide customized ads.
Others
Other uncategorized cookies are those that are being analyzed and have not been classified into a category as yet.
SAVE & ACCEPT